Quitting the application on window close

It's easy to forget to quit the application when the window is closed. Remember to add the following line.

Creating a window is easy. You just have to create a JFrame.

You may wish to give your window a title. You can so do by passing a string when creating the JFrame, or by calling frame.setTitle(String title).

The window will be as small as possible when it has been created. To make it bigger, you can set its size explicitly:

Or you can have the frame size itself based on the size of its contents with the pack() method.

The setSize() and pack() methods are mutually exclusive, so use one or the other.

What to do on Window Close

Alternatively, you can tell the window to do something else when it is closed.

An optional step is to create a content pane for your window. This is not needed, but if you want to do so, create a JPanel and call frame.setContentPane(Component component).

After creating it, you will want to create your components, then show the window. Showing the window is done as such.

For those of you who like to copy and paste, here's some example code. 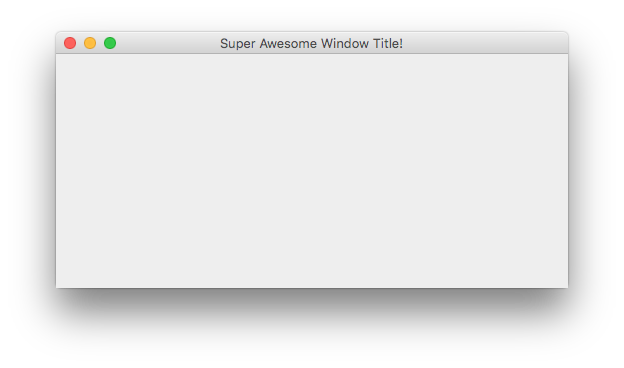 A component is some sort of user interface element, such as a button or a text field.

Creating components is near identical to creating a window. Instead of creating a JFrame however, you create that component. For example, to create a JButton, you do the following.

Many components can have parameters passed to them when created. For example, a button can be given some text to display.

If you don't want to create a button, a list of common components can be found in another example on this page.

The parameters that can be passed to them vary from component to component. A good way of checking what they can accept is by looking at the paramters within your IDE (If you use one). The default shortcuts are listed below.

After a component has been created, you would typically set its parameters. After than, you need to put it somewhere, such as on your JFrame, or on your content pane if you created one.

Here's an example of creating a window, setting a content pane, and adding a button to it. 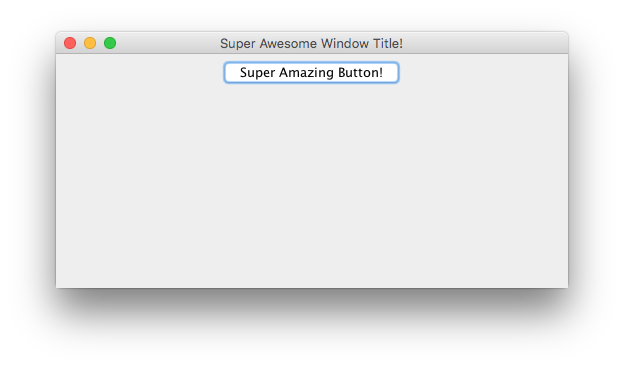 Having a button there is all well and good, but what's the point if clicking it does nothing? ActionListeners are used to tell your button, or other component to do something when it is activated.

Adding ActionListeners is done as such.

Example (Java 8 and above)

Adding components one after another results in a UI that's hard to use, because the components all are somewhere. The components are ordered from top to bottom, each component in a separate "row".

To remedy this and provide you as developer with a possibility to layout components easily Swing has LayoutManagers.

Components have various parameters that can be set for them. They vary from component to component, so a good way to see what parameters can be set for components is to start typing componentName.set, and let your IDE's autocomplete (If you use an IDE) suggest methods. The default shortcut in many IDEs, if it doesn't show up automatically, is CTRL + Space.

Common parameters that are shared between all components

Common parameters in other components

This modified text is an extract of the original Stack Overflow Documentation created by following contributors and released under CC BY-SA 3.0
This website is not affiliated with Stack Overflow
Email: tutorialpedia@outlook.com