Getting started with swing

Swing has been superseded by JavaFX. Oracle generally recommends developing new applications with JavaFX. Still: Swing will be supported in Java for the foreseeable future. JavaFX also integrates well with Swing, to allow transitioning applications smoothly.

It is strongly recommended to have most of your Swing components on the Event Dispatch Thread. It's easy to forget to bundle your GUI setup into a invokeLater call. From the Java Documentation:

Swing event handling code runs on a special thread known as the event dispatch thread. Most code that invokes Swing methods also runs on this thread. This is necessary because most Swing object methods are not "thread safe": invoking them from multiple threads risks thread interference or memory consistency errors. Some Swing component methods are labelled "thread safe" in the API specification; these can be safely invoked from any thread. All other Swing component methods must be invoked from the event dispatch thread. Programs that ignore this rule may function correctly most of the time, but are subject to unpredictable errors that are difficult to reproduce.

Also, unless for good reason, always make sure that you called setDefaultCloseOperation(WindowConstants.EXIT_ON_CLOSE) or else you might possibly have to deal with a memory leak if you forget to destroy the JVM.

Using java.lang.Runnable we make our "Hello World!" example available to Java users with versions dating all the way back to the 1.2 release:

Inside the main method:
On the first line SwingUtilities.invokeLater is called and a lambda expression with a block of code () -> {...} is passed to it. This executes the passed lambda expression on the EDT, which is short for Event Dispatch Thread, instead of the main thread. This is necessary, because inside the lambda expression's code block, there are Swing components going to be created and updated.

Inside the code block of the lambda expression:
On the first line, a new JFrame instance called frame is created using new JFrame("Hello World!"). This creates a window instance with "Hello World!" on its title. Afterwards on the second line the frame is configured to EXIT_ON_CLOSE. Otherwise the window will just be closed, but the execution of the program is going to remain active. The third line configures the frame instance to be 200 pixels in width and 100 pixels in height using the setSize method. Until now the execution won't show up anything at all. Only after calling setVisible(true) on the fourth line, the frame instance is configured to appear on the screen.

Incrementing with a button 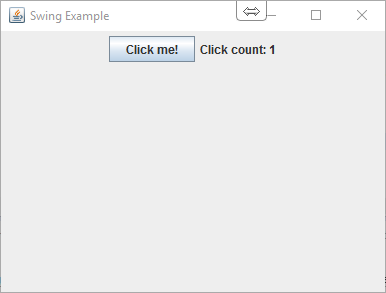 This modified text is an extract of the original Stack Overflow Documentation created by following contributors and released under CC BY-SA 3.0
This website is not affiliated with Stack Overflow
Email: tutorialpedia@outlook.com
Next